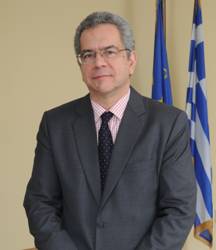 Dr. Leonidas Kanellos was born in Athens in 1962.

He is an attorney-at-law in Athens, member of the Athens Bar Association. He has a long professional experience in the application of EU electronic communications law and competition law in the liberalised market.

He graduated from the Faculty of Law of the National and Kapodistrian University of Athens (1984).

He has served as member of the Legal Advisory Board of the EU Directorate-General for Information Society (1990 - 2001).

He has participated in the Expert Group of the European Commission under the “Crash Programme” for the Development of the Hellenic Telecommunications (1992-1996).

He has co-authored the Founding Act of the Hellenic Telecommunications and Post Commission (1992).

He has participated in a number of scientific committees of the Athens Bar Association (Telematics, Disciplinary Board, Legal Department) (1994 - 2009).

He has served as a legal Expert of the European Committee for Standardization (CEN) engaged in the CEN - ETSI Working Group for the establishment of technical standards for Electronic Signatures (2000 - 2001).

He has advised the EETT Spectrum Monitoring Department in implementing the secondary EU law regarding electronic communications (2003-2005).

He has been in charge of several legislative projects and international studies regarding the introduction of EU law into the Greek legislation (1989 – 2009). These include issues related to competition analysis of networks and services, convergence of multimedia technologies, electronic commerce, electronic signatures, intellectual property in software and databases, consumer and data protection, legal protection of technical standards, regulatory compliance with safety regulations, identification of devices and mobile users and legislation on Fiber to the Home (FTTH).

He has a rich publication record in Greece and abroad, which includes numerous monographs and articles, as well as contributions to books.

He speaks English, French and German. He has a passive knowledge of Spanish and Italian.